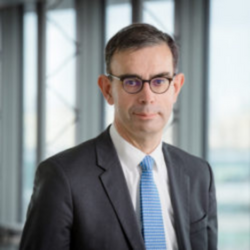 Born in 1965, François Jacq studied at Ecole Polytechnique and Ecole des Mines in Paris. He holds a degree in sociology and a PhD in history of science. In 2000, François Jacq became chief executive officer of the French Agency for Radioactive Waste Management (ANDRA). In 2005, he joined the General Directorate for Energy and Raw Materials at the Ministry of Industry as Head of the Directorate for Energy Demand and Energy Markets. Between 2007 and 2009, he was adviser to the Prime Minister for Sustainable Development, Research and Industry. In April 2009, F. Jacq joined Météo-France, the French national meteorological service, as Chairman and Chief Executive Officer, and Permanent Representative of France with World Meteorological Organization. He was appointed as Chairman and CEO of Ifremer, the French national institute for marine science and technology, in September 2013. Since April 2018, he is chairman and CEO of CEA, the leading French Research and Technology Organization (RTO).